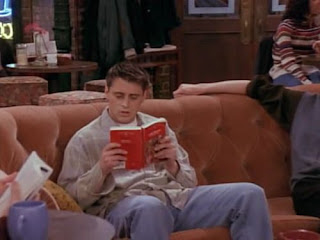 Amy, my fiancee, asked to see this one, and I'm always happy to see just about any movie, especially when free dollars. I came in with zero expectations, and little knowledge of the story. Everything I know about 'Little Women' I learned watching 'Friends.' Thanks Joey!

So again, I was coming into this story only knowing what Joey and Rachel disclosed about Beth, the whole thing was new to me. I've since learned there is a previous adaptation featuring a personal favorite actress Winona Ryder and I'll probably have to check that out.


One thing you will learn about me, is in my advanced age of 40 I cry, a lot. Even commercials make me cry these days, so this film was no different. I spent the last hour in varying stages of tears - both happy and sad.

The first 30-40 minutes of this were tough to sit through if I'm being honest. It had weird flow, and no one was all that interesting. After that, I really enjoyed it. I felt genuinely curious what was to become of the characters. Period pieces such as this always have me in awe of set and costume designs, they did a really wonderful job capturing what I imagine Civil War era New England would have been like.

For the most part I enjoyed the cast. The lead actress Saoirse Ronan was fantastic as Jo March, the other sisters were solid, but I didn't love that Eliza Scanlen basically played the same character as she did in 'Sharp Objects' (aside from the murdering and what-not). I didn't feel anything for Meryl Streep in this, her character was forgettable, and casting Bob Odenkirk (of Breaking Bad/Better Call Saul fame) as the father was odd for me. No fault of his of course, but Bob Odenkirk doesn't scream Civil War soldier to me. Finally, Timothée Chalamet as "Laurie" was so good. He has been in a few other films that were very successful but I've not yet seen them, I'll bump them up a bit now.

Chances are, you have seen the earlier version of this film, or read the book. I'd be curious to know what folks think who have. I liked it more than Amy did, and left the theater feeling good. So they did their job as far as I'm concerned. After an uncertain start, I fell into this hard. Overall, this was an enjoyable movie going experience for me.


Bonus! Trailer Talk - Unlike last week where all of the preceding trailers were quickly added to my "want to see" list, this week's trailers were AWFUL. Peter Rabbit, Call of the Wild, Scooby, and a couple others that looked like CGI nightmares. I guess this is what you get when you see a PG film.

Oh Hell Yes! First up in my year of free movies at Essex Cinema is ' Knives Out ,' trailer below. This film stars James Bond, Detective Sonny Crocket, and two Captains (Von Trapp and America) among other fine people and is directed by 'The Last Jedi' guy  (I don't care what you thought about that film, but I enjoyed it). So you know you are in for the good stuff! SPOILER ALERT, I'M NOT SPOILING ANYTHING. Anyway, I had little knowledge beyond the trailer going into this. I wanted to catch it before it left theaters because I've been hearing people enjoyed it. I was, admittedly a bit concerned because I do see Daniel Craig as pretty much only Bond, but he was great in this even with his...surprising accent, which the film does a good job making fun of so I'll not bother.The trailer also provided me with deep nostalgia for the movie 'Clue' which I loved, and I was again worried this might try to copy that formula, but this whoduneit stood o
Read more