First up in my year of free movies at Essex Cinema is 'Knives Out,' trailer below. This film stars James Bond, Detective Sonny Crocket, and two Captains (Von Trapp and America) among other fine people and is directed by 'The Last Jedi' guy  (I don't care what you thought about that film, but I enjoyed it). So you know you are in for the good stuff!

SPOILER ALERT, I'M NOT SPOILING ANYTHING. 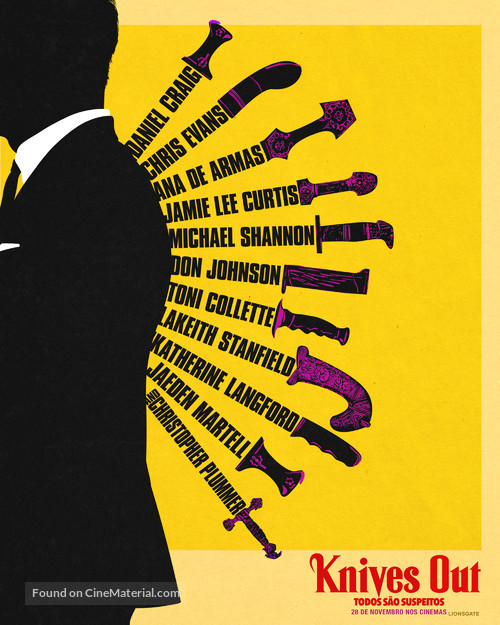 Anyway, I had little knowledge beyond the trailer going into this. I wanted to catch it before it left theaters because I've been hearing people enjoyed it. I was, admittedly a bit concerned because I do see Daniel Craig as pretty much only Bond, but he was great in this even with his...surprising accent, which the film does a good job making fun of so I'll not bother.The trailer also provided me with deep nostalgia for the movie 'Clue' which I loved, and I was again worried this might try to copy that formula, but this whoduneit stood on its own just fine.

Rather than dissect this with my pinky out, and nose up I'll just tell you it was fun as hell and that you should go see it today. Take a friend, ideally the kind that doesn't ever talk in movies because that is a terrible thing to do. My theater was about half full, and everyone was pretty decent except the 2 people that had absurdly inappropriate laughter volume. They didn't have friends to set them straight, apparently.

Again, this is fun as hell and everything from the set design, the characters, the pace, was all really well thought out. It left me guessing until the end, and made me question myself more than once along the way. It was really cast nicely, and though it had a number of well known folks, the main character was somewhat unknown and that served the movie perfectly.

It takes place in the present, and there are a lot of references that make light of some of our current social climate, but it has a timeless feel that everyone will enjoy. I thought it was very clever and fresh, but most of all I just had a really enjoyable time watching it and after all, for me, that is what going to the movies is all about.

Go see it, and let me know what you think!